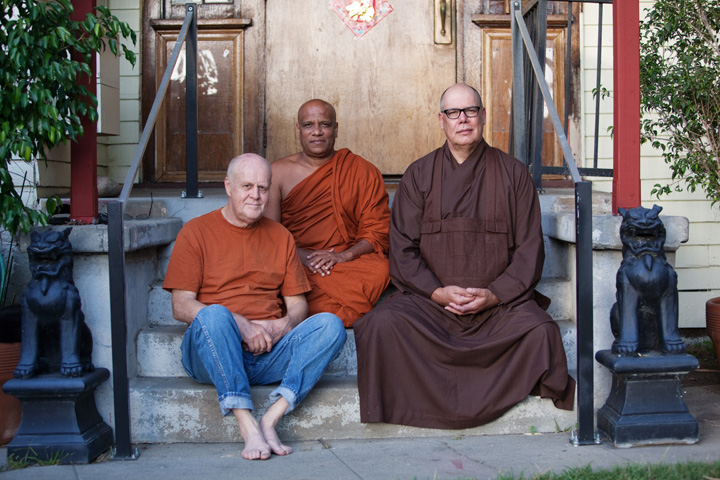 (From left to right) Brother Doug, Ven. Shanti, and Ven. Kusala sit on the steps outside of IBMC. Photo by Rebecca Wilson.
Ordination at the IBMC

At this time,  IBMC is not training or ordaining new monks, nuns or Dharma teachers.
IBMC offers a refuge and 5-precepts ceremony for Buddhist laypeople/householders during Vesak in April or May. Photo by Rebecca Wilson
Ven. Havanpola Shanti was born in Sri Lanka and entered the monastery under Ven. Dr. H. Ratanasara when he was 13 years old. He was ordained as a bhikkhu at the age of 20. He is the Abbot of IBMC and Sri Ratna Vihara International, Iriyawetiya, Kelaniya, Sri Lanka. He oversees the running and religious activities of IBMC, gives Dharma talks, works with students and is involved in InterBuddhist and InterReligious activities.

After attending the University of Kelanaya, where he received his B.A. in Buddhist Studies, Ven. Shanti returned to his home temple. Along with eleven other teachers, he trained 150 young men and eventually took the position of vice-principal of Sri Wijaya Maha Piriwena, Sangalena Raja Maha Vihara, Kurunegala, Sri Lanka. Later, he became the principal and held that position for six years.

After spending a year at a temple in Korea, Ven. Shanti came to Los Angeles to join IBMC and the College of Buddhist Studies as the senior student of Dr. H. Ratanasara. Photo by Rebecca Wilson
Ven. Kusala Ratana Karuna (Thich Tam-Thien) is resident Buddhist monk at IBMC. His interest in meditation brought him to IBMC in 1980. He took refuge and accepted the five precepts of a lay Buddhist in 1981, and was given the Dharma name Kusala (skillful). In 1983, with a growing interest in early Buddhism, he began his studies with Ven. Dr. H. Ratanasara at the College of Buddhist Studies. In 1994, he took his novice monk vows, and in 1996, received full ordination as a Bhikkhu (Monk) with Ven. Dr. Ratanasara and Ven. Dr. Karuna Dharma serving as two of the ordaining masters.

Kusala Bhikshu was a member of the Buddhist- Roman Catholic Dialogue of Los Angeles, Buddhist Chaplain for the University Religious Conference at UCLA and director of the University Buddhist Association at UCLA for 11 years. In 2000, Rev. Kusala was invited to join the UCLA Spiritual Care Committee Medical Center Spiritual Care Committee and is still a member as of 2012.

He was the first Buddhist ride-along volunteer police chaplain in Garden Grove, serving for 7 years. On November 16, 2001, Rev. Kusala received a certificate of recognition from the California State Assembly, and a certificate of special congressional recognition from the United States Congress for his work with the Garden Grove Police Department.

Rev. Kusala gives Dharma talks at IBMC every first Sunday of the month. He also leads meditation sessions at IBMC on Wednesday, Friday and Sunday evenings every week.

Rev. Ksanti Karuna was born Tom O'Connor in Syracuse, New York in 1946. He received a B.S. degree in Drama from Syracuse University. He is a marketing director for non-profits. He has worked for the LA Philharmonic and the NY Philharmonic. He is a board member of the Robert Chesley Foundation's Board and is an active participant in IBMC’s Prison correspondence program. He received his Novice Dharma Teacher ordination in August of 2002, and full IBMC Dharma teacher vows in 2004.

Rev. Sraddha Karuna was born Victor Bumbalo in Utica, New York. He is a graduate of Bennington College, receiving an M.A. in Theatre. He is an award-winning playwright, receiving the Ingram Merrill award for play writing. Among his plays are Adam and the Experts, Niagara Falls, What are Tuesdays Like, and Show. He has also written for television including episodes for NYPD Blue and HBO’s Spawn, Relativity and a number of Movies of the Week. He also co-produced the Three Dollar Bill Theatre in New York. He was founder and board member of the Robert Chesley Foundation, and was a team leader for the Gay Men’s Health Crisis in New York. Today he is an active member of IBMC’s prisoner correspondence program. He received his Novice Dharma Teacher ordination in August 2002, and full IBMC Dharma teacher vows in 2004.

Ven. Dr. Karuna Dharma took full ordination in 1976, becoming one of the first American women to take bhikkuni ordination in the United States. She met her teacher, Thich Thien-An, and began her studies of Buddhism in 1969. She was one of the founding members of the IBMC.

Ven. Karuna became the Abbess of IBMC when Ven. Thien-An died in 1980. She is a past president of the American Buddhist Congress and the College of Buddhist Studies. She served as vice-president of the Buddhist Sangha Council and was a founding president of Sakyadhita, the International Association of Buddhist Women. Ven. Karuna is profiled in Meetings with Remarkable Women: Buddhist Teachers in America, by Lenore Friedman.

In November 2012, Ven. Karuna retired after 32 years as Abbess. She moved to Northern California to live , close to family and friends. On February 22, 2014 at 3:30 am, she died peacefully with her daughter Chrys at her side. She was 74.

May she find happiness and success in her next rebirth.

Doug Solomon (Br. Abhaya Singa) has lived at the IBMC for over ten years, and in the last few years he has worked in the IBMC office as the Residential Manager.